Dreams came true at Comic Con. I watched as fans were literally so star struck before their favorite actress that they couldn’t form coherent sentences. I saw multitudes stand in line to take pictures with big name actors after paying quite a sum of money for the privilege. I got my picture taken with a Dalek (for free) and was able to try on some Wolverine claws after attending a Doctor Who “Q&A” session featuring a celebrity guest. And, to top it all off, General Mills was giving away boxes of Batman and Superman breakfast cereals. Day seized. 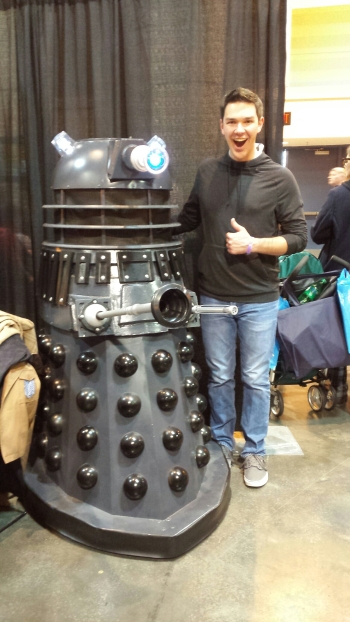 Part of the thrill of this event was due to the fact that it touched on nearly every aspect of my nerd side. Avengers? Check. Batman? Bat-check. Star Wars? Star check. Star Trek? Chekov. Doctor Who? Check times thirteen. From action figures to video games to comic books to movies and tv shows, this place had a monopoly on awesome. But perhaps the most impressive part of the event was the costumed crowd in attendance.

Nearly every major franchise was represented by its devoted fans. Especially interesting to watch were the many people who had not simply donned the attire of a favorite hero or villain, but who had seemingly become the characters they portrayed. Throughout the day and on into the evening costume contest, you could walk around the event floor and find superheroes and supervillains, aliens and predators, anime characters, doctors, ghostbusters, stormtroopers, and a host of other characters posing for photos and playing their parts in honor of their favorite archetypes. This made it quite easy to determine an individual’s passion.

This got me thinking. The early followers of Jesus were called Christians because they looked like Jesus to the world around them (Acts 11:19-26). God had his hand on the church in Antioch, and the people watching them began to take notice. What is described in Acts 11 is prescribed in Ephesians 5, where Paul writes:

Therefore be imitators of God, as beloved children. And walk in love, as Christ loved us and gave himself up for us, a fragrant offering and sacrifice to God.
Ephesians 5:1-2

And by this we know that we have come to know him, if we keep his commandments. Whoever says “I know him” but does not keep his commandments is a liar, and the truth is not in him, but whoever keeps his word, in him truly the love of God is perfected. By this we may know that we are in him: whoever says he abides in him ought to walk in the same way in which he walked.
1 John 2:3-6

As followers of Jesus, imitation is not just a hobby; imitation is a way of life. We respond to Christ’s salvation by modeling our lives after his own, following his example to “seek first the kingdom of God and his righteousness” (Matthew 6:33). And such imitation is not motivated by law, but by grace. We love not simply because we’re supposed to, but “because he first loved us” (1 John 4:19). When the love of God impacts the sinner’s heart, the sinner is forever changed, reborn into the man or woman God created him or her to be.

The thought for today is pretty simple: let’s be good imitators of God. I know I’m not all that good at following Christ’s example. In fact, I’m often more like a fan than an actual follower. But I see the difference more clearly now. I don’t want to just put on a t-shirt and claim allegiance to a club; I want to be fully invested in the kingdom of God. I don’t want to simply show up to the meetings; I want to walk like Jesus walked every day of my life. So I’m praying for focus and faith to see the road and to follow well. I’m praying for diligence and devotion to stay the course and to love the Lord more and more as I run. Because of Jesus, I’m more than just a fan; I’m a son. Jesus has saved me for more than mere lip service. Let me be found faithful, living to the praise of his glory, and let the world see him better through me.