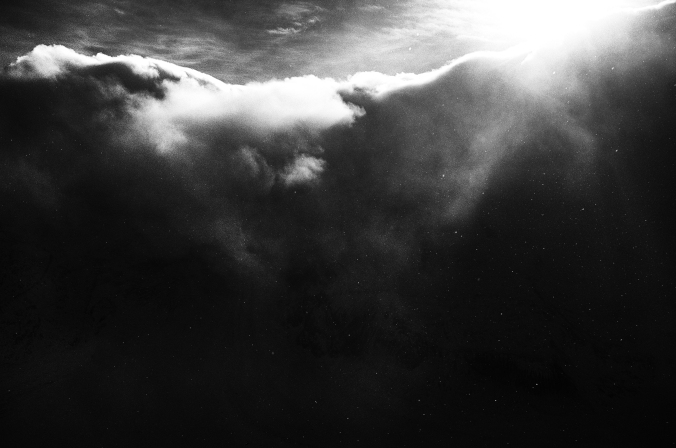 Cold. Not a winter cold, though. After all, this was mid-June. No, it was more of a lifeless cold: a certain uncomfortable feeling that something wasn’t right in the world. It was damp too, as I recall. All around, I felt a paralyzing stillness. It was as if this place had never felt the sun’s warmth, never imagined the spark of love, never shifted from its sullen fixation on its own emptiness. This place was darkness, unadulterated and unexplored.

As I continued further in, I became progressively more aware of my body’s natural reaction to this gloom. My heartbeat grew louder with every step I took, its pulsing rhythm quickening moment by moment. My skin became clammy, adding an uneasiness to my demeanor that chilled my very soul (a word I had once ridiculed as a denotation of a preposterous and dangerous belief). My mind slowly began to lose its focus on the task at hand and began to feel a very strong fear.

Fear. No, that word doesn’t quite fit; terror paints the better picture.

Until this point, I don’t believe I truly knew what terror was, despite all that I had seen and heard. These new feelings threatened to break me. Every fiber of my being, every inch of my sanity, screamed at me to turn back. Yet my stubbornness was still too strong. I almost shouted back at myself, “Come to your senses! This is only emotion! Press on! Finish the test!”

Oh, how I regret my ignorance.

I continued on and soon found that I could think of nothing else but the deep darkness that encompassed me. To say it was oppressive would describe it too mildly; I felt it would kill me if it had the chance, as if the environment had some sick intent behind it. Yet, at the same moment, I almost believed myself to be already dead, as if life had been a myth all along. I quickly realized that I was being more affected by this depravation, this evil (though I was still hesitant to call it that) than I ever was before, and I desperately sought a way of escape. In all of my search to find the root of what evil truly was and where it came from, never in my wildest imaginings had I thought I would encounter something such as this. In my mind, evil did not exist as the masses believed it to exist. I was a naturalist. Good and evil were simply descriptions given to actions, not based on any set reality but instead stemming from society’s ideas of what was good and what was evil. Though I could recognize something as “good” or “evil,” the goal of my research was to prove that good and evil were simply imaginings in the minds of dreamers, and that we should stop all this fuss about people being good or people being evil. People just are; there is no standardized morality inside of them or outside of them apart from the claims of lunatics who would enslave us with their maniacal convictions. This was my belief at the time of this encounter. This is what drove me to press on in spite of my fear. This is what led to a glimpse of hell.

For years, I had interviewed men and women, both religious and non-religious, in an attempt to understand the concept of evil better. While I understood the common descriptions, I never maintained that they existed beyond the mind, though I knew many held a different belief. It was that belief, that evil was objective, that I sought to expose to the light of reason. For years, I had read and studied every source I could find that spoke on the topic of evil and that assumed its existence. For years I had pondered, debated, and fought to prove that they were all wrong. All of my study had led me to this point. Now was the final test, the move to check mate, the crushing blow.

There I stood, at the climax of my search. A number of religious leaders claimed they knew where evil dwelt, and there I stood on the doorstep. I had followed the directions precisely, arriving where evil was said to abide. Yet where I expected to find nothingness, I found a doorway to darkness, a precipice facing a seemingly bottomless pit of what can only be described as… evil. In spite of all the work I had done prior to this point, I could find no other word that so fully encompassed what I met. I shuddered to think that I could have been wrong, but this… this was unlike anything I had yet experienced. Even still, like a fool, I continued on in an attempt to justify my madness.

It was then that I heard the whispers.

At first, I didn’t notice them. When I did, I tried to convince myself that I didn’t. But they were there, urging me to dive deeper, to simply give them an ear. My fear grew intolerable. Turning to escape, my eyes fell upon a figure clothed in shadow and enveloped in horror. I stood motionless at the sight, sheer terror overwhelming me. My legs quivered. I felt nauseous. My eyes did not blink. As my mind raced with all that it was beholding, the figure took a step toward me and spoke.

His voice was much like my own, yet it was twisted and distorted, as if broken and dead. His voice urged me to embrace him, to allow him to set me free from the fear, yet I felt sure that no freedom he offered would be true freedom. In him was darkness. In him was death. Of this I did not doubt. His very presence reeked of evil. Again, I wanted to describe things differently, but no other word fit. I had gone searching for evil, thinking it to be a myth, and was met with a horrifying reality.

As I stood paralyzed, unwilling to step nearer to the monster, he began to shout and scream and wail, all the while walking toward me, his arms outstretched as if to pull me into himself. I feared I would be lost if he succeeded. I wanted to run, but I could not move my legs; I collapsed onto the floor a quivering mess. In a moment of panic, I reached for the only thing that seemed to bring peace to me in that moment: the small, leather-bound book that a seminary professor had given me after one of our interviews. I held it tight to my chest, surprised it was still in my coat pocket. Still the figure came closer, screaming that the book couldn’t help me, that I was not “marked.” As I realized all the ways I had been wrong, I felt new waves of hopelessness pound my already trembling body. My mind seemed flooded with the darkness. Was there no escape from my foolish discovery?

Desperately, in a moment of clarity, I closed my eyes and choked out the only words that came to my mind, the same words spoken by the tax collector in the story one pastor shared many months ago:

Suddenly, something reached me. I felt the strongest shudder and the deepest pain I had ever known. The experience, as best as I can describe it, was as if I was a dead man dying. I felt I should never recover, the turmoil within me was so great, the struggle in my soul so intense. I heard an ungodly howl; it was as if the devil himself were being murdered. I cried for my life, yet wished myself dead. The experience was like assassination and birth all at the same time. In that moment, I believed that I had died, yet, simultaneously, I believed myself to truly live, as if for the first time.

And then silence. Stillness. Peace.

I opened my eyes to find myself lying on the floor in my hotel room, clothes soaked with sweat. Confused by the sudden change from dark to light, from tension to peace, I looked around and saw my camera facing me, still running, next to my open laptop. Typed on the document on the screen was this message:

Friday, June 13, 7:06 pm.
Test: “Heart” of Evil
Description: Religious sources interviewed claimed that evil lies in the heart of man, that, “None is righteous, no, not one” (Romans 3:23 in the English Standard Version of their Holy Bible). If this is true, I should find evil if I look deep enough into my own heart; if this is false, then I shall simply find myself as I have always been, and I will show that all “evil” men are simply products of environment and society.

I thought briefly about what I should report. The research had led to this test; I must have an answer. I reached down and added the following words to the report:

Discovery: I searched the depths of my heart and became lost in my discoveries. I did find myself as I have always been: it lives within. I am its slave and great is its reign. Evil lives within.

I went to save the document, but first added one more line:

At least, it did until now.

One thought on “The Discovery”