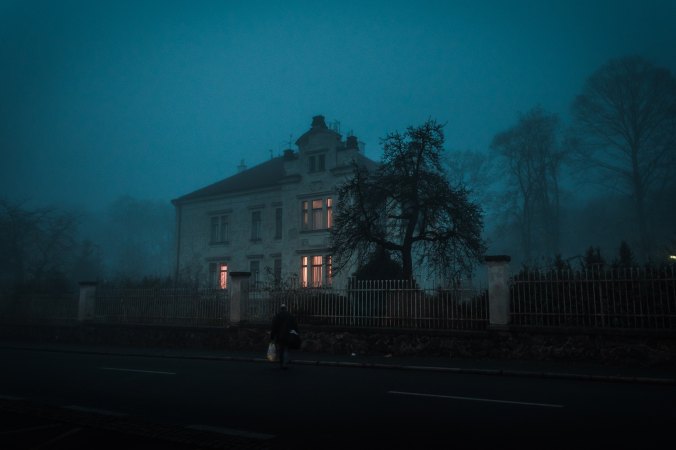 A family begins to notice odd things around the house: doors opening and closing seemingly on their own, voices speaking from unseen mouths, apparitions walking past in one’s peripherals. The family writes these events off at first, claiming exhaustion or stress or some easily explainable cause, but the events grow increasingly more noticeable. The situation then becomes violent. One family member becomes the focus of the activity, exhibiting unnatural characteristics that endanger both the individual and the entire family. Fear intensifies all around.

At this point, the family, unsure where else to turn, seeks the help of the church. They learn that their problem is spiritual, demonic in nature, and they find that they have to trust in something greater than themselves if they hope to weather the storm. They are at the mercy of the supernatural, hoping against hope for a happy ending.

Tales like the one above are well known to fans of horror movies. Variations on this story notably appear in films such as The Exorcist, Insidious, and The Conjuring, but they’re far from rare occurrences. In each case, when the problem stems from the spiritual realm, people turn to the church, hoping to fight the spiritual with the spiritual. They look for hope wherever they can find it, finding it most often, of all places, in the church.

Hope might be the most valuable possession in horror movies (that, and some basic common sense). Hope to save a loved one, to survive the ordeal, or to maintain control each drive people forward. Hope keeps people from giving up, from accepting defeat at the hands of their enemies. Hope keeps people fighting until their final breaths. In horror movies, hope is often attached to an object (e.g., a gun, or a knife, or a wooden stake). If the protagonist can only get to the weapon, the enemy can be defeated. If she can just find the right tool, she can rid herself of the menace. The object of hope in movies about demonic activity, however, has long fascinated me. In these stories, the enemy can’t be defeated with a silver bullet or a stake through the heart or a blow to the brain. In these stories, God himself must intervene.

Granted, people typically don’t pray. Instead, they tend to speak in the name of Christ, hoping to harness the power of the Lord against their dark intruders. Such an approach may explain why demons in these movies seem largely unfazed. Biblically, such appeals to names merely amuse the demons (see the example of the sons of Sceva in Acts 19). Demons recognize when power is absent. But the flip side is also true, proving people’s hope to be well-founded: demons tremble when they encounter the true power of the Lord. As the disciples of Jesus returned from their work, they rejoiced in their ability to cast out demons. Yet Jesus taught them to rejoice not in the power at work through them but in the relationship from which that power stemmed. The key was not in the riddance of the demonic but in the relationship with the divine (Luke 10:17-20). This truth is further emphasized when we read of another encounter with possession in Scripture, an encounter where the disciples were unable to deal with the demon because of their “little faith” (Matthew 17:20). Faith in the God who saves, not simply the formulaic articulation of his name, makes the difference.

As we find ourselves in another October, our screens may well be filled with ghouls and goblins and ghosts. Murderers and monsters make up much of the movie content on TV this month. And along with these arrivals come stories of the demonic, of opposition and oppression and possession. In some ways, these spiritual stories have more potential to scare us, perhaps because they get closest to a full depiction of reality. Perhaps tales of demons scare us more than stories of monsters because we know, on a deep level, that demons are real threats. These stories, then, lead us to think about spiritual matters, about the possibility that there’s more to life than what we see. This month, rather than avoiding all such stories, consider giving them a bit of thought. While I’m not necessarily encouraging you to go rent The Exorcist for this week’s family movie night, I am encouraging you to consider the reality these stories point toward, to remember that Hollywood, despite its flaws, can sometimes convey some much needed truth. And remember, in your considering, that Christ gives us true, living hope that will not be put to shame. Remember how Jesus dealt with the demonic, showing clearly his authority and power to save. Remember how demons themselves responded to Jesus, and note how different the biblical interactions are from modern stories (see this post for more on that idea). And remember that neither darkness nor demon nor the devil himself can separate the children of God from the Father’s love (Romans 8:31-39). Christ offers unshakable hope in himself, giving those who would follow him eternal life that lasts through all natural and supernatural threats. So fear not, but instead hope in a living Lord that causes demons to tremble (James 2:19). And rejoice in your life with him.

This post was written with Cade Stepp in mind, who loves movies and horror more than anyone I know. Happy Birthday!

Huge thanks to Maci for her editing work on today’s post.